You'll need to know about different types of kayaks to complete requirement 4b.

Recreational Kayaks come in several styles. Below we have pictured a sit-inside and a sit-on-top kayak. Recreational kayaks can be inflatable like the one pictured on our major parts of a kayak page. We have even found a folding oragami kayak.

Recreational Kayaks are generally used on flat water, such as lakes, gentle streams, and on the the ocean near the shore. Compared to touring kayaks they are a little shorter (usually less than 12 feet long), have less cargo room, are wider and are more stable.

Whitewater Kayaks are shorter and wider for increased manuverability and stability. The body of the kayak is rounder than other kayaks. They turn easily, but are difficult to paddle in a straight line.

Sea or Touring Kayaks are generally longer, and slimmer than other kayaks. Because they are longer, they are easier to paddle in a straight line, but they are not as manuverable. They often have more cargo room, and are usually the best choice for long trips.

Decked, or sit-inside kayaks are the traditional type of kayak. The top part of the boat is covered, and the kayaker sits in the cockpit. The cockpit usually has a rim around it so that the kayaker can wear a spray skirt to keep them and the inside of the boat dry.

Sit-on-top kayaks are popular for fishermen, scuba divers, and new kayakers. They are easy to get in and out of, since the kayaker sits on top of the kayak instead of inside the cockpit inside the kayak.

They are generally wider than decked kayaks, which makes them more stable but at the same time a little slower in the water.

Below is a photo of a spray skirt installed on a the lip of a decked kayak. 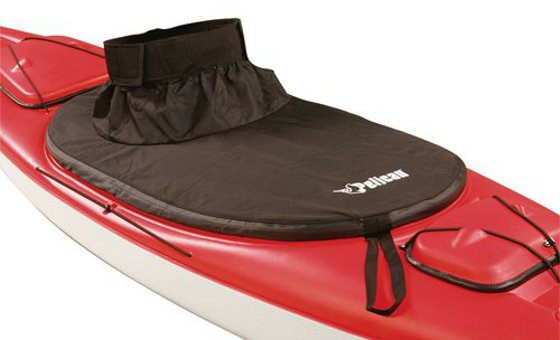 Inflatable kayaks, as you can probably guess, must be pumped up with air to use them. They can be cheaper than conventional kayaks, and are more portable and easier to store. However, they can be also be more difficult to paddle than other kayaks.

We found the photos of these kayaks at amazon.com. So out of courtesy, we'll link to the pages where we found these photos. (This might bring them some more traffic, and allow you to read up more on these kayaks.)